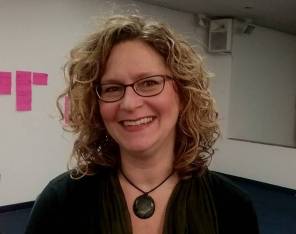 The word “settler” reminds me that I’m not indigenous to this land. How might things be different if we thought of ourselves as guests? Not visitors, but guests, because we’re on somebody else’s land.  I think in Canada they use that language more often; it’s more common to talk about themselves as settlers. In Canada, they have – it seems to me – a much more clear way to say [for example], “We’re gathered here on Treaty 6 land.” They know what the treaty was. But in the United States we have over 500 treaties, and every single one has been changed or nullified or broken, so it’s not as clear to us to be able to identify ourselves that way. So maybe using our language is one way to say [that] through all this complex history, I still know that I come into this story through settlers.

The word “settler” reminds me of my ancestors, who settled in this country. I am a few generations away from that era, but I’ve earned the privileges that come from them settling and therefore, the responsibility to respond appropriately. In the Loss of Turtle Island exercise, one of my favorite quotes is by Paul Erb (Mennonite educator and editor):

[W]e can begin by trying to see the historical process through Indian eyes. We can acknowledge the wrong that was done. And at least we can be careful not to see in the pioneering of our forefathers only the heroic deeds, the wresting forth of new churches and new communities in the quest for religious freedom. We can try to see the other side: our forefathers’ failure to see that they were benefiting fairly directly from the destruction of other people’s lives and communities–as we are still benefiting.

To call myself a settler doesn’t mean I have to be laden with guilt and shame. It’s just  to say, “This is who I am.” I don’t use “settler” as a negative word; to me it’s an acknowledgement of my history. I can love my ancestors, and still feel a great sense of grief for what they participated in. And that’s what the Paul Erb quote holds together – we can see their struggle to create a good life, AND that they benefited and that we still benefit from the destruction of other people’s lives.