A Mystical/Material Vision of Restored Abundance as Call to Discipleship

Note:This sermon was shared at St. Michael’s Episcopal University Church in Isla Vista, CA, on Feb 6, 2022, at the invitation of Rev. Scott Claassen. It was the occasion of dedicating a new mural (below) painted that week by our friends Dimitri Kadiev, Rufo Noriega and Joshua Grace.

We in the Ventura River watershed, like you here in the Los Carneros creekshed, live and work on unceded Chumash land. So we gather today as church to nurture our ongoing responsibility and accountability to our Creator’s call to justice and restoration, as you all prepare to celebrate 65 years as a parish next month.

In today’s gospel for the Fifth Sunday in Epiphany (Lk 5:1-11), Luke powerfully stitches together two traditions of memory: the miraculous catch of fish also found at the end of John’s gospel (21:1-14), and the call of fishermen which also occurs at the beginning of Mark’s gospel (1:16-20). Let’s look at both themes, each so important to the vocation of following Christ.

Jesus’ encounter with workers on the shores of Lake Galilee is typically romanticized in our churches: Oh, how quaint, fishermen! But this trivializes a powerful, real-world scenario. In fact, Luke’s scene communicates defiance and delight, resistance and renewal—the same energy that fueled the painting of the new mural of the Goleta Slough just completed by our friends, which we dedicate today (photo above). Every story has a context, not least those in the Bible, which too many people read as it if took place in Disneyland! We know a lot, from both history and archaeology, about this scene depicted by Luke.  Scholars tell us that the Sea of Galilee in the early first century was ground zero for efforts by imperial Rome to exploit the resources of the occupied territory of Palestine.  When Jesus was a young adult, Tiberius had become Emperor in Rome after the death of Caesar Augustus, and the local Judean ruler Herod Antipas was building a city on the shores of Lake Galilee, naming it Tiberias in order to curry imperial favor. The primary function of this new administrative center was to regulate the fishing industry around the lake, the most prosperous segment of ancient Galilee’s economy. A new wave of Roman colonization placed the lake’s fishery firmly under the control of Roman and Herodian elites, who restructured the industry for export markets.  New state regulations benefitted the wealthy managerial class, while disenfranchising peasant boatmen. 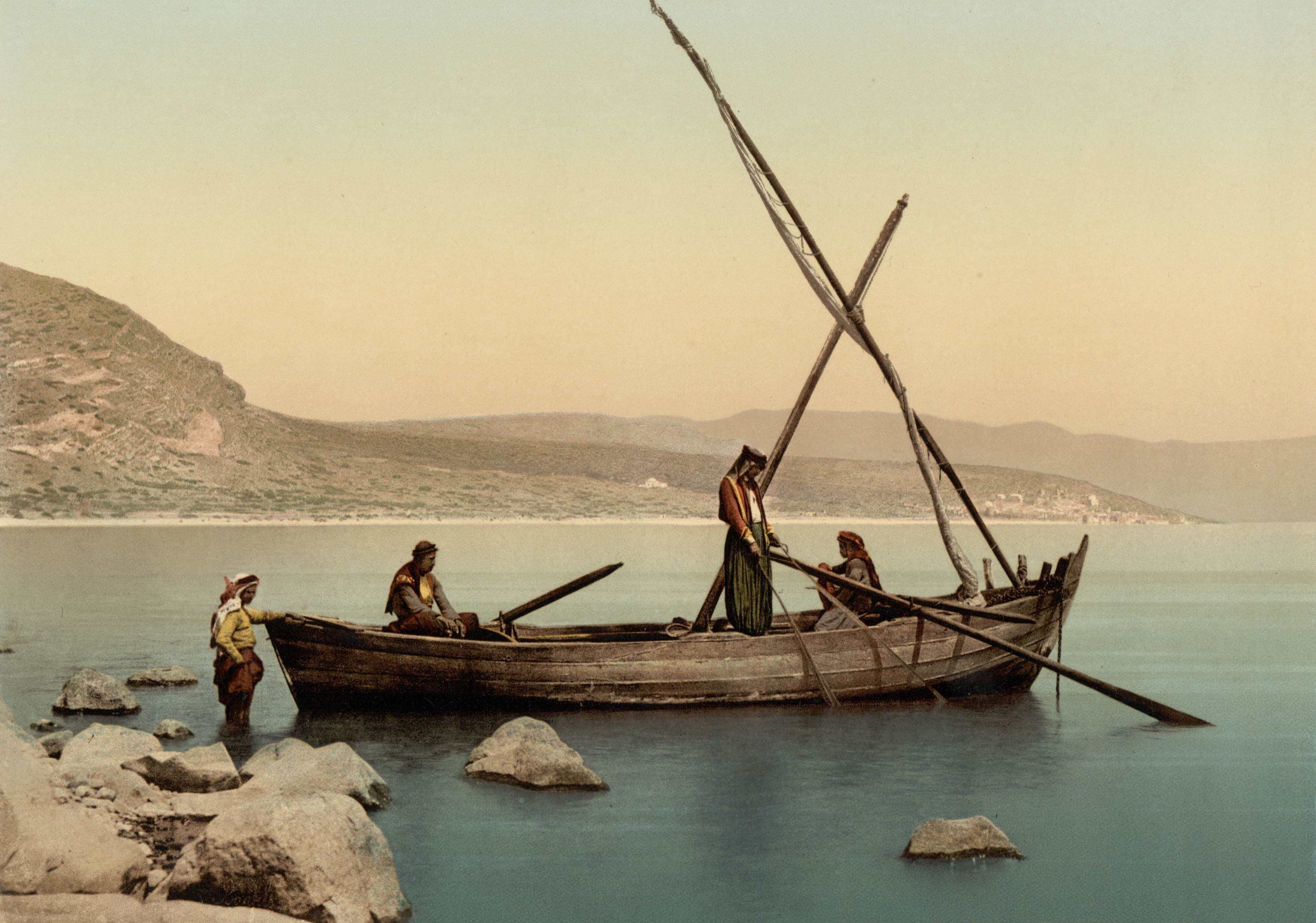 Native fishermen, who had traditionally harvested these waters in a sustainable fashion for local consumption—just as the Chumash did in Goleta Slough for millennia—were now required to buy fishing leases from the regime. The Herodians taxed them and controlled their markets in order to fund roads, harbors and factories. These processing plants (such as the one at Magdala, where Mary was from) turned fish into salt preserve or sauce for export. Elites thus looked down on fishermen even as they depended upon their labor: one ancient papyrus called them “the most miserable of professions.” (Above: Photochrome image of fishermen on Sea of Galilee, ca. 1900.) 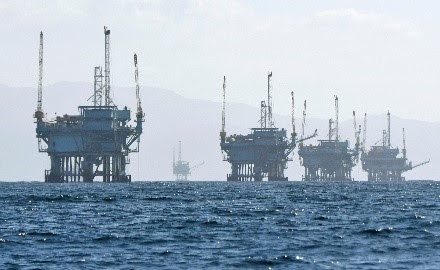 So when Jesus of Nazareth showed up at the sea, as narrated in all four of our gospels, he was walk-ing right into a distressed economic landscape—boom for a few, bust for most. Top-down strategies of economic and infrastructure development inevitably enrich the few and impoverish the many, as we still see in our world. Such as when the government cooperated with oil barons in the late 1950s to begin building 19 offshore oil platforms and pipelines throughout the Santa Barbara channel (above). 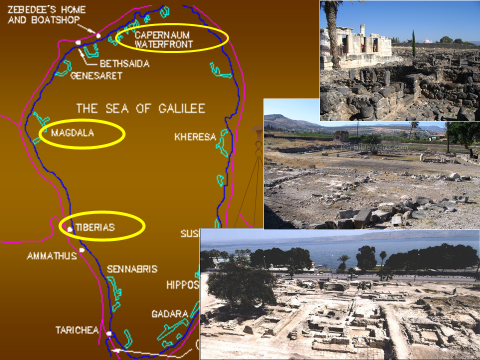 The ancient fishing village of Capernaum, just up the coast from Magdala and Tiberias, was profoundly impacted by Herodian policies. This made it a logical place for Jesus to commence building a movement of dissent, beginning with restless peasant fishermen who had little to lose and everything to gain by overturning the status quo. Like Gandhi’s mobilization of the “untouchable” classes in India in his 1930 Salt March to the sea. Or Martin Luther King’s fateful decision to stand with the Memphis sanitation workers’ strike in 1968. True change can only come from below.

Our gospel text depicts Jesus organizing a teach-in among these disgruntled workers. He borrows a boat from a crusty peasant named Simon, and pushes just offshore so he can use the water and beach as a natural amphitheater. He concludes his analysis of their plight with an object lesson: instructing Simon to shove off into deep water and try casting one more time (Lk 5:4). The boatman’s response is poignant: “We worked through the night, but caught nothing” he laments bitterly (5:5). His local waters were becoming fished out, depleted by industrialization—like diamond mines in Africa today, or rain forests in South America, or tar sands fields in Canada. Or your local Goleta Slough.

It’s testimony to Simon’s desperation that he follow the stranger’s advice anyway. Then comes the moment of revelation: suddenly there are “so many fish that their nets begin to break,” and when hauled in they “fill both boats so that they began to sink.” For this mystical-yet-material moment of hope, the abundance of creation had been restored, with a catch that might break their nets, but also the cycle of their poverty. Like Luke’s later story of multitudes sharing bread in the wilderness, God provides enough for our need; just not for our greed, as Gandhi used to say. (Below, the beloved late artist John August Swanson’s beautiful rendering; at www.johnaugustswanson.com/default.cfm/PID%3D1.2.30.2.7.html). 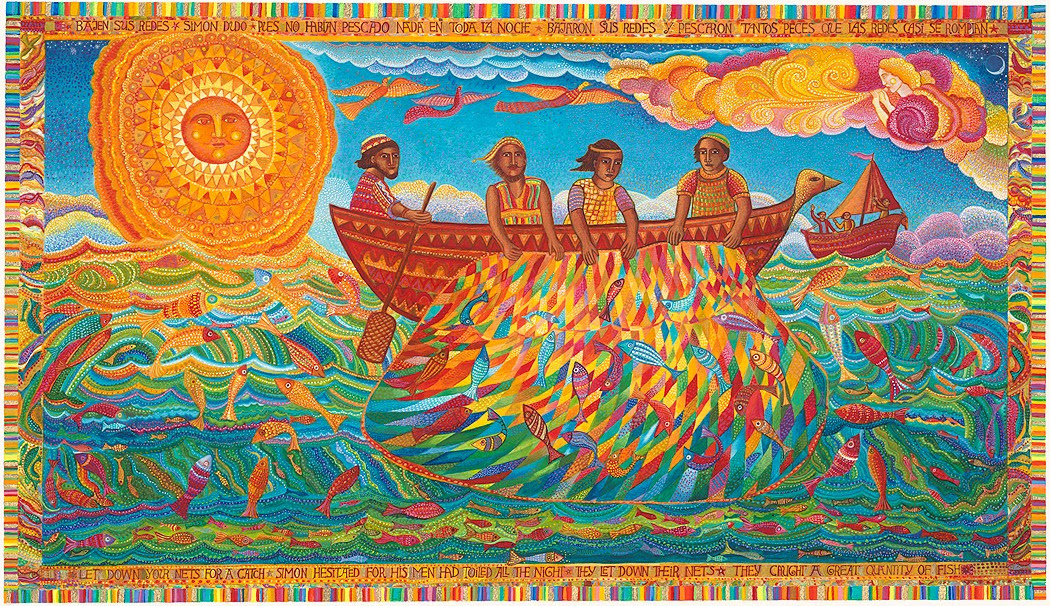 These fishermen have been given a glimpse of how their waters used to be, before colonization —much as this mural confronts us with a vision of Goleta before oil platforms, airports and suburban sprawl. Your brilliant UCSB sociology professor Avery Gordon calls this the lingering, ghostly presence of unresolved past and continuing violence to a place and people. No wonder, then, that Simon’s visceral response is one of shame: what empire has done to Creation is indeed “sinful.”

He and his compañeros are amazed, but they are also paranoid. This subversive memory of abundance might animate a Messianic “uprising” against unjust resource over-extraction by the Romans. On the other hand, this copious catch would certainly be criminalized by the authorities as contraband, inspired by an itinerant preacher without a fishing license! So: should these hard-pressed peasants joyfully gather the illegal windfall —or run for the hills? You see, wildcat resource redistributions were, and still are today, very risky business.

Jesus understands their anxiety, and offers them something more powerful than a bumper harvest: a paradigm shift, and an alternative vocation. “Do not be afraid,” he says compassionately, then invokes hope: “From now on you will be catching people” (5:10). Rest assured: this trope is not some sort of Billy Graham-like summons to go door to door saving souls. Rather, Jesus is remembering the promises of his people’s prophets that Creator demands justice from those who oppress the poor. Such as Jeremiah, who envisions Creator “sending for many fishermen” in order to catch the leaders of Israel “who have polluted the land”… (Jer 16:18). Or Amos, who warns the elites of Israel that Creator will “take them away with fishhooks” to justice (Amos 4:2). Or Ezekiel’s rant against Egypt’s Pharaoh: “Creator will put hooks in your jaws, and… pull you up from your rivers,” along with the fish to which you claimed exclusive rights (Ez 29:3-4).

For Jesus—who not only knew the prophetic literature, but sought to embody it anew in his context—this “fishers of people” idiom was a divine invitation to poor folk to join him in overturning structures of power and privilege in the world, in order to restore both Creation and justice. In modern parlance, the rabbi was calling them “to help me catch some Big Fish.” Indeed, Luke concludes his story by noting simply that those fishermen “dropped everything, and joined the movement” (5:11). Their eager response echoes Isaiah’s in today’s reading: “Here am I; send me!” (Is 6:8)

The mural we are about to dedicate depicts the naturally abundant Goleta slough as the ecological and spiritual heart of Chumash life in this place prior to European invasion. As our Isaiah reading put it: “The earth is full of Creator’s glory” (Is 6:3). But 250 years of Spanish, Mexican, then American genocidal colonization, and the ecocide of a century of industrial development, destroyed so much of this place and the culture of its Indigenous caretakers. It’s a haunted history with which we settlers here must come to terms—as we explore in our Healing Haunted Histories: A Settler Discipleship of Decolonization.

The end of January was the 53rd anniversary of the 1969 uncontrolled blowout from an oil platform out in this channel, which spilled crude for several months over forty miles of this coastline (above). The mural celebrates how local protest campaigns arose from this catastrophe, helping birth Earth Day and the modern environmental movement in the U.S.  I was 14, and remember those events well. Our muralists, in their statement, rightly ask: “What are our responsibilities today as individuals and communities to these waters and to the Chumash? This mural invites a reconnection to love these lands, examine our callings, and fight for their rights and health once again.”

So friends, may we follow in the footsteps of Isaiah, Simon, and those first Earth Day activists, and rededicate ourselves to Creator’s movement for restoration and justice, right here in this watershed.