The following article is a cross-post from Christian Peacemaker Teams. The original post from December 4, 2016, can be found here.

The U.S. Army corps of engineers has today, December 4, 2016 announced that they will deny key permits for the construction of the Dakota Access pipeline and explore alternative routes, one day ahead of a deadline they’d set for the evacuation of Oceti Sakowin. As we celebrate this victory, it is important to name the sacred roots of the resistance at the camp, which is often portrayed with ugly caricatures drawing on centuries old stereotypes of Indigenous Peoples.

When I told my friend Erica Littlewolf that I was going to Standing Rock for a week with Christian Peacemaker Teams, she encouraged me to reflect from “a mind space and also a heart space” as a white man in that setting. I heard this refrain again on my first morning in the camp during our orientation to Oceti Sakowin camp, when the facilitators invited us to focus on our heart space and “walk in touch with the land and with themselves.” That might mean, for example, holding onto our questions instead of asking them immediately so that we can listen to the knowing in ourselves.

Again and again during my week there, I felt Oceti Sakowin pull me into that heart space.

I felt that pull on Wednesday morning when I had joined a long line of people praying along the Cannonball River. Our boots sank into the icy mud as we bent forward to toss tobacco into the river. Tobacco is one of the four key medicines used frequently in Oceti in ceremony. At the close of our prayer, hundreds of geese flew above us in formation, heading south.

I felt that pull on Friday when I looked out over the camp from Media Hill and watched a group that calls itself the Gathering of Deafatives using sign language to express their solidarity with Standing Rock for a live feed on Facebook (view it here). I found myself weeping at the beauty of this community coming together with wide smiles on their faces as they reached out to their community around the world. Over 50,000 people have now watched that video.

I felt that pull on Saturday morning when a Shoshone elder led us in a circle dance as the sun rose around the sacred fire. Late in our movements, as our circles slowly moved opposite each other, she called out to us to stop. We waited expectantly and then watched as she bent down to tie the shoe laces of one of the dancers. And my heart saw Jesus bending down to wash his disciples feet.

I felt that pull on Thursday morning, when most in the country gathered around turkeys. I was crowded with more than 100 other water protectors into a large geodesic dome in the center of Oceti with our body heat and a stove warming us from the freezing temperatures outside. Together we were preparing for mass direct action together. After an opening prayer, one of the indigenous organizers began to speak. His voice rose and fell as he challenged us to ground ourselves and let go of all hate towards the police and recognize them as people who were lost and in need of healing. He talked about how mother earth grieves as she watches us hate each other. The message was at once deeply earnest and deeply strategic, not through analysis, but through the pull of the heartspace.

As I listened, my mind drifted to Dr. King’s sermon before the assembled crowd headed out to confront Bull Connor in Birmingham, Alabama, US in May 1963. Not only were we connected by fire hoses used against us, in our case in freezing temperatures on Backwater Bridge on November 20 (see photo). It is also the spiritual grounding and call for transformation of hateful law enforcement. I have never experienced a mass movement so grounded in spirituality and song, as during my week as part of the camp. 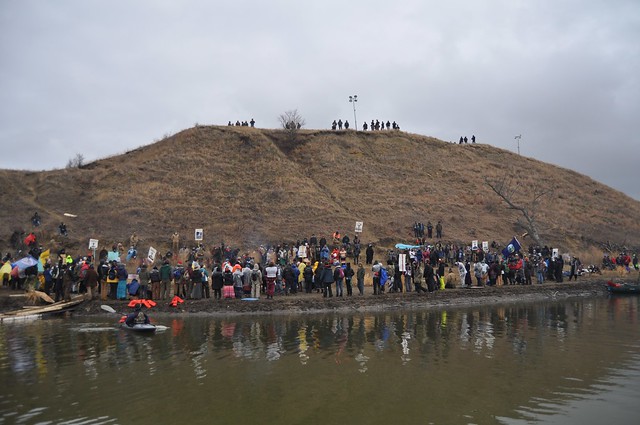 Photo caption: Prayer and Ceremony on Turtle Island on November 24, 2016 on the a sacred burial ground of the Standing Rock Sioux that is owned by the Energy Transfer Partners where the Dakota Access Pipeline is being contructed. Photo by Tim Nafziger.

Oceti Sakowin leaks the light in, like few other places I have been. In English, Oceti Sakowin translates “seven council fires” which is the name the Sioux prefer for themselves. Their relationship with the land is not an abstract one focused on property deeds, but an intimate knowing, grounded in the seasons and the stories of the land, both tragic and sacred. The hospitality and welcome of the people of the seven council fires has blossomed, bustling with the energy of dozens of camp fires and the central sacred fire. Eight kitchens, two construction camps, a donations management system, media and legal collectives serve people from more than 200 indigenous nations and their settler supporters. The coordination is remarkable, usually handled by one or two people known only by their first name: Peggie, Paul, Bear, Mary Anne, Sam.

County, state and federal authorities consistently ignore the sacred center of the water protector movement. As a Mennonite, I resonated deeply with the woven braids of prayer, ceremony and resistance which come together in that place and in that movement, echos of which I see in my own centuries-old dissenting tradition.

In the midst of this powerful and hopeful space, the threat of raids and violence laid heavy. It is especially important for us as settlers to remember the massacre at Wounded Knee (and the siege a century later), the Sand Creek massacre, the Whitestone massacre and more recently, the police raid of the Minehaha Free Space. The Indigenous Nations gathered at Standing Rock know that their prayers and ceremonies flow out of that 400-year struggle against colonization.

I’ll close with one more story. On the plane out of Bismark, I talked to Hunter Franks and Michael Parks, two young white settler men who had been in Bismark for the same week that I had. Franks said that he, like many settlers in the U.S., only thinks about Indigenous Peoples two or three times a year, so a week of Indigenous-centered leadership was deeply impactful. The emphasis on service was especially striking: “I was waking up and thinking ‘How can I serve today’ instead of what do I want to do today?”

Are we, as settlers on this land, willing to listen with our hearts to the people, place and spirit of the seven council fires?